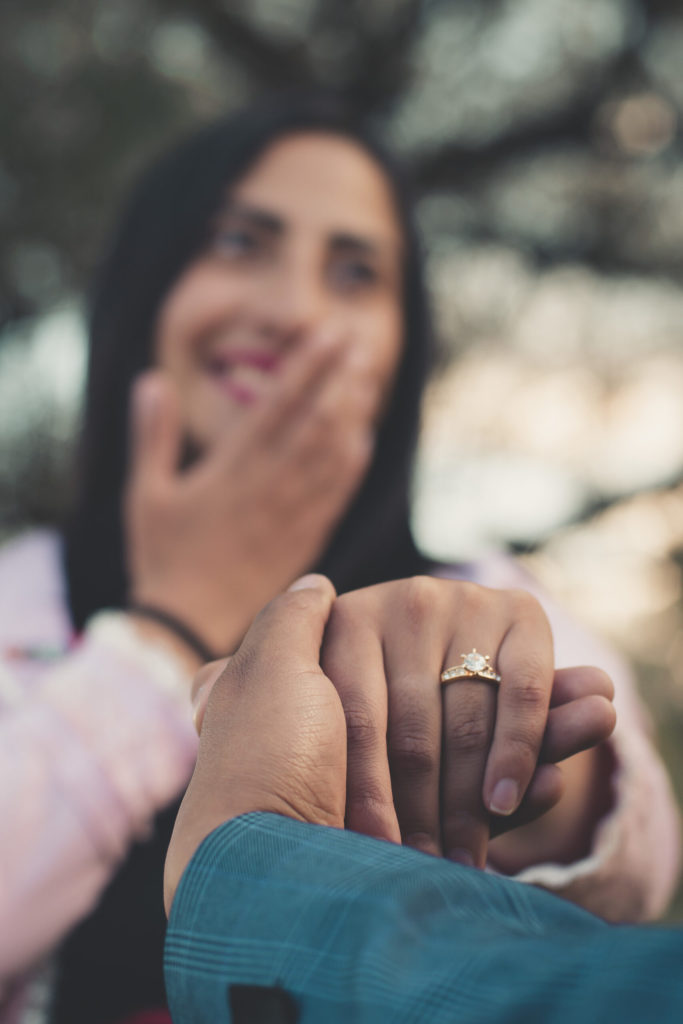 When it comes to everything and anything in life, celebrities always go above and beyond – we know that. Buying an engagement ring is no exception. So, which celebrity has the biggest and most expensive engagement ring out there?

The bigger the ring the more it costs right? Not quite. When it comes to measuring the value of a diamond, it is usually broken down into four factors. These are known as the ‘Four Cs’ – Cut, Colour, Clarity and Carat.

No anyone diamond is the same, just like not any one person is the same. In the world of jewellery, the Four Cs are used to determine the value and rarity of each diamond, which of course makes the engagement ring unique as well and determines its price and value.

So, what exactly do the Four Cs mean?

Cut: The ‘Cut’ of a diamond refers to the quality of how the diamond is proportioned and how many angles and symmetrical facets it has. These impact how the diamond sparkles when it is hit by light. The GIA (Gemological Institute of America) will use a grading system to evaluate the diamond cut based on the criteria – ‘Excellent, Very Good, Good, Fair and Poor’.

Colour: The ‘Colour’ of a diamond is also based on GIA grades using scale D to Z. When it is a ‘D’ grade it is referred to as ‘colourless’, meaning the diamond is clear. As it goes down the scale, this means the diamond has brown and yellow tints to it. The colour might not be noticeable to the naked eye, but the price point is very different.

Clarity: The ‘Clarity of the diamond is determined by the blemishes and imperfections the diamond has. This is based on the GIA scale from ‘FL’ (flawless) to ‘I2’ (Inclusions 2). Of course, the more flawless the ring, the higher the price.

Now that you understand how a diamond is priced, which celebrity has the most expensive and biggest diamond ring?

As mentioned, the size of the ring does not always play a big role in the rarity of a diamond ring. Often it is not the weight of the ring, but also how pure the diamond is, that is a leading factor for how it is priced.

However, in the world of Hollywood and celebrities, it appears the price and the carat go hand in hand for the biggest engagement ring. Famous singer, Mariah Carey reported having the biggest and most expensive diamond ring in the celebrity world. Her engagement ring, which she wore for only a short time, was 35-carats and was priced at $10 million. Given to her by her ex-fiancé James Packer (Australian’s really do know diamonds, right?). Although the couple split, Mariah kept the ring, continued to wear it for 12 months and then sold it for $2.1 million.

Going back through time, Elizabeth Taylor held the most expensive and biggest engagement ring in her possession for quite a while. The actress was married a few times, but it was the ring given to her by Richard Burton that was the grandest. The value of the ring was around $8.8 million when it sold at auction in 2011, but this engagement ring was an impressive 33.19 carats!

Here is a list of some other very big and outstanding engagement rings worn by celebrities:

The list of expensive and big engagement rings goes on and on! So how do the other half live??

What is the Average Diamond Ring Size?

Those 20+ carat rings are of course beautiful, but let’s have a look at the more affordable diamonds, shall we? So, what does the “typical” engagement ring look like? What carat size do we see on a normal day to day?

The average carat weight of an engagement ring is around 1.00 to 1.2 carats. Yes, we know, not what you were expecting right? But these rings are still beautiful and carry a lot of value! Of course, it does also come down to the other C’s we mentioned too, colour, clarity and cut!

From Mariah Carey to Kim Kardashian, there are some celebrities out there with some huge rocks on their finger! But of course, it isn’t always about size.

When it comes to evaluating the size of a diamond ring, it comes down to the Four Cs, which include cut, colour, clarity and carat weight. Of course, these celebrities appear to have all four with their rings being priced in the millions!

At Kalfin, we love all things diamonds and offer quality when it comes to the Four Cs of a beautiful diamond engagement ring! From custom made pieces to gorgeous rings we have on show, contact us today to chat about your future engagement ring.

Diamonds are the quintessential stone of engagement rings. Despite a gradual interest...

The Best, Brightest, & Most Beautiful Celebrity Engagement Rings Of 2021

Love is love, and not even a worldwide health pandemic can stop it! We’ve seen plen...

The Ultimate Guide To ‘Eternity Rings’: What They Are, What To Choose, And Where To Buy Them

The Ultimate Guide To ‘Eternity Rings’: What They Are, What To Choose, And Where ...

Jewellery House, where creativity blends with inspirations & craftsmanship is infused with elegance, to forge opulent memories.